The Castle of the Mazovian Dukes 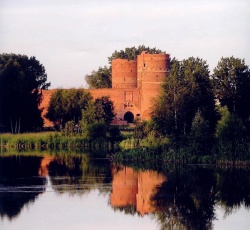 The Castle is Ciechanów’s most splendid monument and one of the most interesting examples of “defensive” architecture in Poland. Made of gothic-style brick, on stone groundwork and reinforcements, it is spaced out on the plan of a rectangle (48 x 57m) with a square yard inside. The oldest traces of settlement in the area of the Ladinia bend date back to the end of the 13th century. It is believed that a  stronghold made of wood and earth built by Konrad II existed in this place. The brick castle was the work of Siemowit III, who (in 1370) built a guardhouse which was supposed not only to guard the crossing on the Ladinia River but was also a shelter for the inhabitants against the Lithuanian and Teutonic raids. Duke Janusz I, after 1410, built a big residence which was later on modernized and rebuilt several times. The castle was built by a curve of the river Ladinia on damp land. The original height of the castle walls did not exceed 5m. However, due to the damming up of local rivers for milling, the water level raised so much that it begun to flood the castle yard. The yard had to be therefore raised by 1,5m and the main gate, which was located between the castle’s towers – covered up with earth. 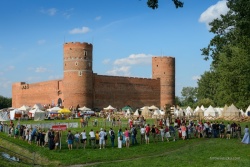 The gate was abandoned and another gate was built in the western wing – the new gate replaced an old side gate. The castle walls then turned out to be too low. The castle was therefore developed until its walls and towers reached their present height. The habitable part of the castle was located in its north wing, with a chapel in the northeastern corner. The castle’s best days were indisputably under queen Bona, who received it as a present from the king Sigismund the Old who adjoined Mazovia to his kingdom in 1526. Bona was a frequent visitor to the castle. Inspired by the fashion for Renaissance, she ordered the habitable wing to be rebuilt in this style. After she left Poland, the castle was left almost unattended and begun to fall into ruin, gradually loosing its former importance as a defense object. The Swedish invasions in 1657 and 1708 caused multiple damages and the Prussians contributed to its final ruining after the Third Partition of Poland. The habitable wing, which consisted of a representative brick building and a smaller wooden house, was pulled down. In the interwar period, as well as after the Second World War,  the castle was gradually reconstructed and made accessible for tourists. The original rectangular outer wall (9,8m high) with two round towers: the south-eastern (prison) tower and the western tower called “the arsenal” (which served mainly for the purpose of defense, as the crenullation and pitch tank seem to suggest). In 2004 the side-gate was reconstructed on the northern part of  the castle. The museum exhibitions are located in the vaults. A stone commemorating the death of 4 soldiers of the Home Army, who were hanged on the 17th of December 1942, is located in the stone yard. The castle in Ciechanów was the source of inspiration for many writers and artists. It was visited and praised by: Zygmunt Krasiński, Hipolit Gawarecki, Stefan Żeromski, Bolesław Prus, Henryk Sienkiewicz, Maria Konopnicka. 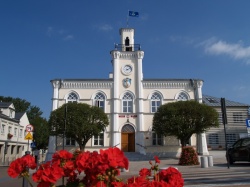 The Town Hall is a neo-gothic building located on the north side of the main square. It was built in 1844 and is based on a project by a well know Italian architect Henry Marconi (1792-1863). Made of brick, spaced out on the plan of a rectangle, with a new part added from the back – the building has two floors, a cellar and a four-sided tower on the axis of the facade. The corners of the building are decorated with multilateral pillars. With ogival windows, a mould under the eaves composed of neo-gothic arcades that form the capitals of the pillars, roofed with sheet iron – the Town Hall is one of the most beautiful and visible buildings in the town. It has been the seat of town’s authorities for many years. 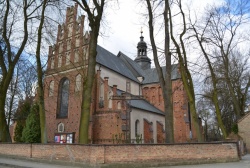 The church was built in the second half of the 14th c. and is dedicated to St. Joseph. The parish is dedicated to the Birth of the Holy Virgin Mary. This building in late-gothic style is located in the centre of the town (11 Ściegiennego St.) and has become the most well-know temple in Ciechanów. Its interiors are filled with objects of historical value, plaques, and epitaphs. A cemetery was located by the church from its very beginnings until the middle of the 19th c. Throughout the centuries, the church had been profaned many times and many of its most valuable treasures had been stolen. It was almost destroyed during the Swedish wars. The year 1807 proved to be one of the most difficult years in the history of the church – the French army marched into Ciechanów while heading east. The church was devastated and transformed into a flour warehouse and a bakery. Its renovation began as late as in 1821. At that time, masses were held at a nearby church of the Augustinians. Renovation works took place between 1876 and 1878 and another big reconstruction plan was carried out between 1913 and 1920 (basing on a project by the architect Stefan Szyller). The church walls were repainted and the roofing-tile was substituted with a lowered roof covered with iron sheet. The temple was again partly destroyed during the Second World War and another renovation was necessary in 1946-1954. Despite the numerous attacks that the church had been subjected to in the course of history, it remains one of the finest examples of well-preserved “Mazovian gothic style” in architecture. Spaced out on the plan of a cross, constructed using erratic boulders in the lower parts, with all corners and side walls covered with set-off buttresses – the church has three naves. The central nave is higher then the side naves – a rarity among old churches. A beam cross from the 16th c., two granite stoups from the 14th c. and a crucifix from the first half of the 17th c. are to be found inside. The sepulcher of Stanisław Szczurzyński (who died in 1556) with a bas-relief depicting a full-scale knight has remained intact. This bas-relief is considered one of the five sculptures heralding the approach of the Renaissance in the Mazovian Region.

The Belfry on the Parish Mountain 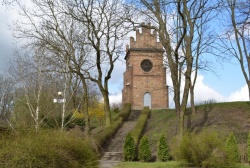 The neo-gothic belfry from 1889 was built in the place of another, wooden belfry from the 17th century. It is a four-sided building with transparent open-works and pinnacle tops. The belfry is considered an important monument in the church-complex. 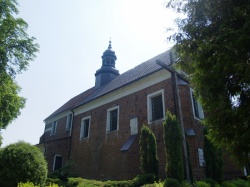 The gothic church, nowadays under the invocation of the Holy Virgin Mary, belonging to the parish of St. Tekla (3 Augustiańska St.), was built by the duke Siemowit and his wife Eufemia in the middle of the 14th c. It was built for the Augustinians who came to settle in Ciechanów and was then dedicated to St. Martin.  The land on which the church and the monastery were located had been given to Siemowit by the king Casimir I in 1353. The order then dissolved after the January Uprising and the temple was raided many times. After its last reconstruction – the side naves and the vault were pulled down, new arcades were added and the ogival windows were substituted with rectangular ones. The existing polychromy work dates back to 1920 and was designed by Władysław Drapiewski. Many valuable historical artifacts are to be found in the church: the baroque main altar, a pietà from the 18th c., a crucifix from the 16th c., a 7-voice organ from the 18th c. and a baroque pulpit. The mortal remains of monks rest in the vaults of the church. 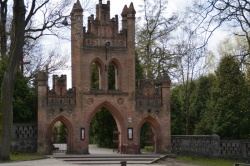 A neo-gothic belfry-gate from the second half of the 19th c. leads to the post-Augustinian church. The belfry-gate is composed of three ogival arcades with pinnacles and gives one the possibility to admire the true craftsmanship of its design. 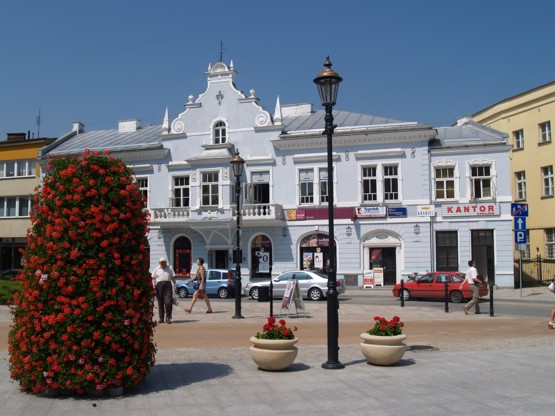 house is located by 2 Ściegiennego Street. Built in 1912, it has become one of Ciechanów’s most beautiful buildings and has its place in the national register of monuments. 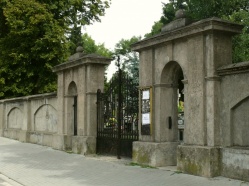 The oldest cemetery in Ciechanów is situated on Płońska Street. Inhabitants of the city were buried here as early as in 1828 and the graves of insurgents, social activists, participants of revolutions, and those who lost their lives or were murdered during the war are to be found here. The cemetery, its gate and the enclosure were registered on the list of protected motionless ancient monuments.

The Chimney of the Brickyard 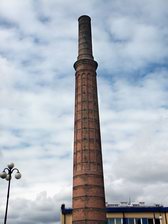 This monumental structure dominates over the district Bloki. The chimney (located on 58 17 Stycznia Street ) is all that is left of the 100-year-old production plant that finally stopped producing brick at the end of the ‘70s. The clay necessary for production was taken from the adjoining grounds and the brickyard was closed after running out of clay. The two big clay-pits that remained now serve as water reservoirs. The chimney is considered an “industrial monument” of Ciechanów.