According to a legend, Ciechanów was established by a legendary pagan duke Ciechan, who was looking for an appropriate place to settle down. He came across a high hill, surrounded by flood waters of a wide river, among fertile fields and broad forests full of game. He established a homestead and, together with his wife Dobrogniewa, begot ten sons with the help of whom he built a massive wooden stronghold. 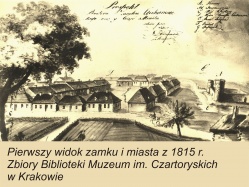 The archeological discoveries on the Farska Mountain (Hill) have proven the existence of the 7th century settlement. The fragments of ground bulwarks covered with field-stones date back to the 10th – 11th century. What is more,  archeologists encountered post-stronghold settlements and an 11th century cemetery north from the town. The first written record about the town (castrum) appeared in a document issued in 1065, under which King Boleslaus the Brave allowed Benedictine monks form Mogilno to collect tithes form Ciechanów. The type of the tribute proves the significance of the town at that time.

One of the factors that contributed to the development of the town as an administrative-economic centre was its location – the amber route used to run through the town from the north to the south. The route intersected here with a trade route running from the west of Europe to the east. All these conditions have made Ciechanów one of the leading towns in Mazovia. It became both administrative, as well as defensive centre of the region. The development of the town was interfered by the raids of the tribes from the north. Since 1180, it was attacked by Pomeranians, Prussians and Jacwings (Prussian-Lithuanian people annihilated by the Teutonic Knights). In 1337 the Lithuanian wreaked a terrible havoc under the duke Olgierd‘s command. That was the time when the wooden stronghold on Farska Mountain (Hill) was destroyed.

In the second half of the 13th century, Ciechanów was a castellan’s seat. In the second half of the 14th century, the raids of Lithuanian tribes stopped, which caused further development of the settlement. Ciechanów was granted a town charter by the duke Siemowit III, which was later sustained by his son Janusz I.  The town was developing around the 14th-century castle, built on the island around the river bent (in the same place where the wooden stronghold had stood). The town’s economy was flourishing – the demand for produce increased, craftsmanship developed. In the 14th century, Ciechanów became the capital of the Ciechanów Land.

After the heirless death of the last Mazovian Dukes, in 1526 Ciechanów, with its population of 5,000 people, was annexed to the Crown, together with the whole Mazovia. The town, with its brick tenements and paved roads, was getting wealthier thanks to craftsmen, merchants, and farmers. The Swedish invasions of 1657 and 1708 caused the collapse of the town. The number of people diminished considerably (to 936 inhabitants in 1794). After the Second Partition of Poland, on the basis of the decision of Sejm Grodzki (the Parliament),  it became (for a short period of time) the capital of a voivodship. Fires and epidemics had beset the town up to the 1880s. Not until the second half of the century did the period of relative development for Ciechanów begin. The newly built railway system favoured the spread of minor industries. In 1864 the brewery was founded, in 1870 – the brickyard, in 1882 – the sugar factory, and finally in 1901 – the steam mill. The number of people increased successively. Again, one could observe the development of education and culture. In 1882 the Voluntary Fire Brigade was founded, in 1906 -  the Society for Polish Culture. Gradually, the number of inhabitants increased. By the end of the 19th century it exceeded 10,000 people. During the interwar period, in spite of the economic crisis, the town was developing and the number of inhabitants reached 13,650 (1921). Ciechanów was also becoming an important cultural centre. Several professional and social organizations were established and various local periodicals and journals started being issued. In 1921 a secondary school was established. In 1937 the town started developing the power system and waterworks. During the German occupation, on October 8, 1939, on the orders of Hitler, Ciechanów (together with the eight surrounding counties) was annexed to the Third Reich and became the capital of the Ciechanów Province. Since the Germans had planned to rearrange the town, several buildings were demolished and some housing estates were built for the German administration. 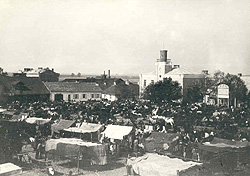 As a result of terror about 40% of residents were killed in force-labour camps, vast majority in  POWS camps (prisoner-of-war) and in torture cells (about 3,700 of Jews and hundreds of Poles). Several underground organizations were operating in the region at that time: the Home Army (Armia Krajowa), the Union of Armed Struggle (Związek Walki Zbrojnej), the National Armed Forces (Narodowe Siły Zbrojne), the Peasant’s Battalions (Bataliony Chłopskie), the People’s Army and Guard (Armia Ludowa, Gwardia Ludowa). On January 17, 1945 Ciechanów was liberated from the enemy. As a result of the war, there were both losses in people as well as financial ones. What is more, all the production factories were destroyed. However, it was not until 1961 that the population of Ciechanów reached 20,364 inhabitants. The town was developing auspiciously – new companies sprang into existence. Until 1975, Ciechanów was the capital of the province, and in the years 1975 – 1998 it used to be the capital of voivodship.